The term laser is an acronym for light amplification by stimulated emission of radiation. The name therefore describes how a laser beam is generated. In essence, it consists of a substance which will emit light when excited, normally by an electric current. Lasers may be classified as being pulsed or continuous wave (CW); the latter produces hundreds of thousands of pulses every second and therefore looks continuous. Visible laser wavelengths range from 400 to 750 nm; within this range Helium-neon and Argon-ion lasers are most widely encountered. Other lasers operate below (ultraviolet) and above (infrared) the visible spectrum.

Gas lasers utilizing a mixture of Helium (He) and Neon (Ne) produce a visible red light at a constant wavelength of 632.8 nm, with relatively low power outputs from a fraction of a milliwatt (mW) up to 100 mW. For higher power capacities and a range of wavelengths CW lasers based on Argon (Ar) are available. Small, compact, single-phase, air-cooled argon-ion lasers range from 25 mW up to 300 mW; as shown in Figure 1 air passes over cooling fins attached to the tube in order to remove excess heat.

Higher power capacities of up to over 6 W are available from water-cooled, three-phase argon-ion lasers. These lasers produce a multitude of wavelengths in the blue and green regions of the visible spectrum. The gas is housed in a plasma tube constructed from a metal/ceramic combination. A line diagram of the components of a modern commercial argon-ion laser is shown in Figure 2. Each of the lasers shown in Figures 1 and 2 have similar design features, the tubes are sealed, to maintain a vacuum, by high-quality windows. The cathode provides the electric current used to excite the gas and causes photons to be emitted. Further stimulation and amplification occur before the output laser beam is emitted via the output mirror. Figure 2 shows that the plasma tube is surrounded by a water jacket which is used to cool the outer surface of the tube. An adjacent gas reservoir is used to ensure that the plasma tube is fully charged. The mirrors on either side of the Brewster windows reflect the light between them so that lasing will occur (the Brewster windows allow light of one polarization to pass through without any reflection losses.) The mirrors are highly reflective so that only a few percent of the actual laser power available is used as the output laser beam. Wavelength selection may be achieved to provide single-line or multiline operation. 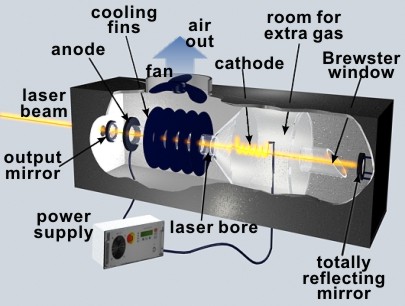 The special properties of gas lasers which make them so well-suited for measurement purposes are:

Other high-power gas lasers are based upon a metal which has been vaporized, such as Copper, Krypton and Gold.

Dye lasers are made from a liquid which has been colored by a dye. They produce beams of different wavelengths when excited by another laser.

Solid state and chemical lasers have found application for specific uses. Pulsed lasers are usually more powerful than CW lasers since their energy is concentrated in pulses whose length may be varied.

Semiconductor diode lasers able to operate at room temperatures, with lifetimes approaching or exceeding those of gas lasers are today, small, light-weight and inexpensive. These miniature lasers operate in the visible (700−800 nm), short (800−900 nm) and long (900−1600 nm) wavelengths. Small semiconductor lasers are used to highlight beams produced by lasers operating in the invisible infrared regions. These high-powered lasers are widely used in the medical environment. Modern applications of lasers cover an ever expanding range of scientific, medical and industrial uses. All lasers should be treated with caution irrespective of the environment in which they are used.