The complex physical effects in the solar photosphere and also in the vicinity of the Sun have attracted the interest of numerous researchers over many years. A series of space missions has been recently arranged by the National Aeronautics and Space Administration in the framework of the Solar Probe project. It is especially important to make observations and measurements at relatively small distances from the Sun. In order for such a mission to be successful, one of the main technical problems to be solved is that of creating an acceptable thermal regime for the probe equipment, which is exposed to the very high thermal radiation flux from the Sun. Ordinary ablating thermal protection may be insufficient to reach the desirable duration of the mission. Therefore, it is important to find a novel method to protect the solar probe from intense solar irradiation.

One possible way of attenuating solar radiation can be based on the use of micron-sized particles generated by an advanced thermal protection material during the matrix ablation. At extremely small distances from the photosphere, this principal solution to the thermal protection problem is expected to be more promising than using special reflecting coatings (Congdon et al., 2010). The latter statement is briefly examined in the present article, which is mainly based on the studies conducted by Dombrovsky et al. (2017) and Dombrovsky and Reviznikov (2018).

A weakly absorbing substance of particles seems to be preferable; however, it does not help to decrease the radiation absorption in the particle cloud because of multiple scatterings (Dombrovsky and Baillis, 2010). The calculations showed that a high melting temperature and relatively low sublimation rate of solid particles at high temperatures are the decisive advantages. At the same time, the dielectric particles, which are semi-transparent in the visible and near-infrared spectral ranges, have additional advantages because they do not prevent propagation of microwave radiation for both the remote sensing and transfer of the obtained data to a host vehicle in the Earth's orbit. Therefore, silicon carbide (SiC) was considered by Dombrovsky et al. (2017) as a good preliminary choice for the particle substance. Silicon carbide is characterized by very weak absorption in the main part of the solar spectrum and also by a relatively low sublimation rate.

The central problem in the computational analysis is the spectral radiative transfer through a cloud of absorbing and scattering particles; however, this key problem should be considered together with the coupled processes of both the thermal destruction of the matrix of composite protection material and the sublimation of SiC particles. The effect of the complex motion of particles under both the drag force from gases generated during the thermal protection ablation and the light pressure, which is especially important for partially sublimated micron-sized particles, should be estimated.

As in many papers on radiation in heat transfer problems, the details of the scattering phase function of single particles can be neglected in the case of multiple scatterings. The simplest transport approximation approach appears to be a highly successful method, which has been used to solve many applied problems (Dombrovsky, 2019; Dombrovsky and Kokhanovsky, 2021). According to this approximation, the scattering function is replaced by the sum of the isotropic component and the term describing the peak of the forward scattering. The good accuracy obtained with this approach in solving combined heat transfer problems is explained by the use of the integral (over the angles) characteristics of the radiation field, such as the radiative flux (in the boundary conditions) and its divergence (in the energy equation).

Both the optical properties of SiC particles and the kinetics of SiC sublimation in a vacuum were considered in detail by Dombrovsky et al. (2017). In the present article, we focus on modeling both radiative and heat transfer in a particle cloud.

The problem under consideration is simplified as much as possible to obtain physically sound estimates; however, the following special features of the real problem are still taken into account: the real spectrum of solar irradiation and the spectral properties of micron-sized SiC particles. The main simplifications are as follows:


The 1D radiative transfer equation is still rather complex even with the use of transport approximation. Therefore, the approximate two-flux method is employed. It is known that the error with this method, both in the radiative flux and its divergence, is sufficiently small in the case of smooth profiles of the temperature and medium properties (Dombrovsky and Baillis, 2010).

The boundary-value problem for the spectral irradiance, G(z), is obtained as follows (hereinafter, subscript λ is omitted for brevity):

where α, σtr, and βtr are the absorption, transport scattering, and transport extinction coefficients of the cloud, respectively. The relative radial distance from the photosphere is defined as R̅ = R /Rsol, where Rsol is the radius of the Sun, and Ib(T) is the Planck function for blackbody radiation. The spectral and integral radiative fluxes to the protected surface are:

The radiation power absorbed in the cloud is calculated as follows:

It should be noted that the complex motion of the particles may lead to the presence of particles of different sizes and temperatures in every elementary volume of the cloud. In this case, the absorption and transport scattering coefficients and the volumetric source function are expressed as follows:

3. HEAT TRANSFER MODEL FOR A CLOUD OF IMMOVABLE PARTICLES

A simplified preliminary estimate of the radiation shielding effect can be based on the model of a cloud containing immovable particles without any supply of new particles from the ablating composite material. It this case, the mathematical problem statement can be completed by using the following energy equation and the kinetic equation for the sublimating particles:

Obviously, the volume fraction of the particles decreases because of their sublimation:

Some typical results of the numerical solution to the previous problem are presented in Figs. 1 and 2. The main parameters of the variant are R̅ = 5, Tw = 2000 K, and fv0 = 2 × 105. Coordinate z in Figs. 1 and 2(a) varies from zero at the shadow side of the particle cloud to z = d at the cloud side illuminated by thermal radiation from the Sun.

It is interesting that in the very beginning of cloud heating—when there is no SiC sublimation and Eq. (6) is radically simplified (Fig. 1)—the radiation is the only heat transfer mode and the radiative equilibrium condition is reached (Dombrovsky and Baillis, 2010; Howell et al., 2010; Modest, 2013) when the temperature profile is determined by the condition of the constant integral radiative flux across the cloud. The decrease in W(z) to zero at the radiative equilibrium is very fast and takes ∼0.1 s. Of course, this regime is not realized in the real problem when the particle cloud gradually forms under the action of solar thermal radiation. At the same time, the solution to this hypothetical problem is interesting because it indicates that the changes in the temperature profile are much faster than the governing processes of the cloud formation and sublimation. The subsequent relatively slow changes in the main parameters of the particle cloud during the period of considerable sublimation of the SiC particles are illustrated in Fig. 2. 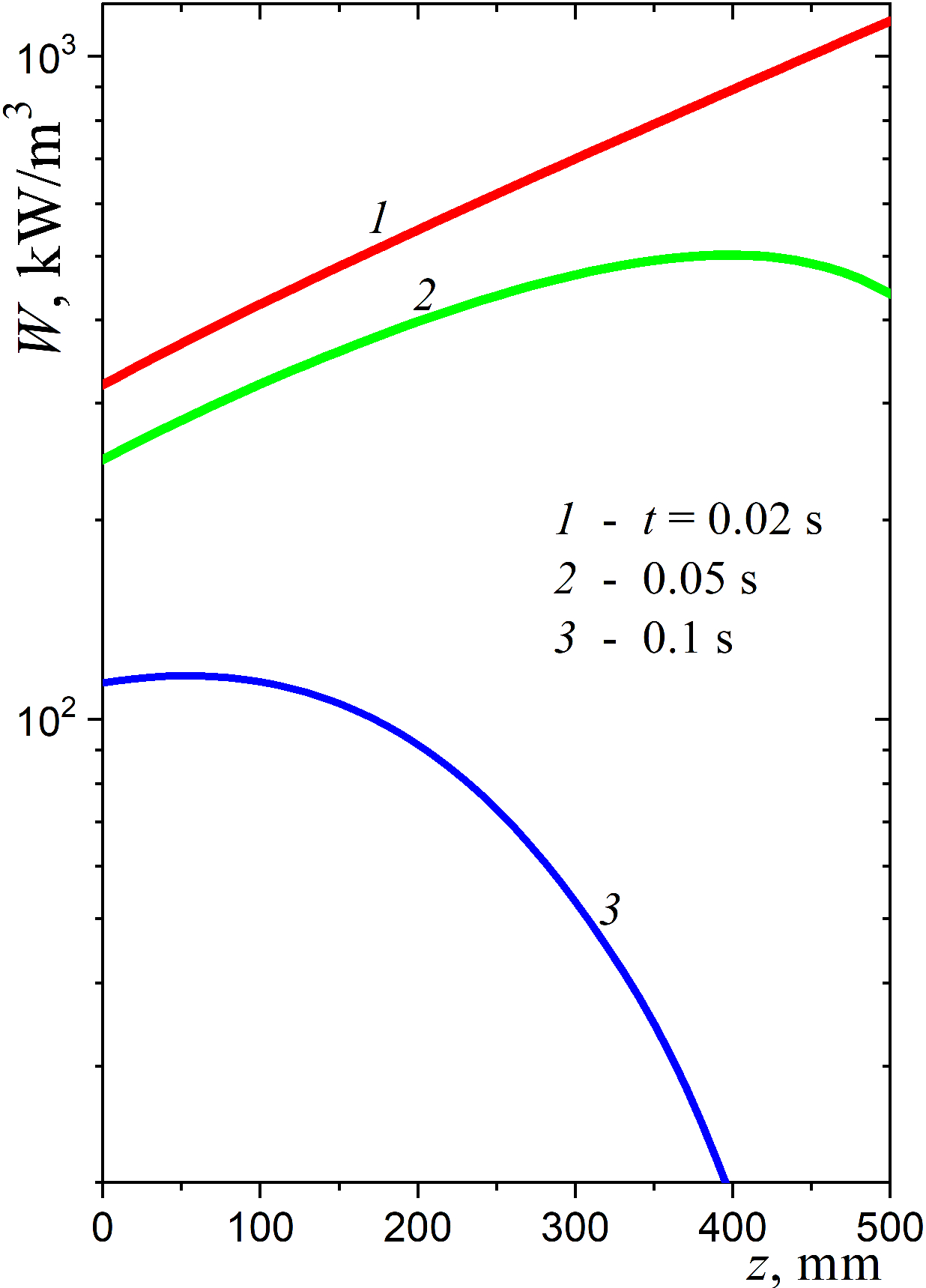 Figure 1. Profiles of absorbed radiative power at the initial stage of cloud heating 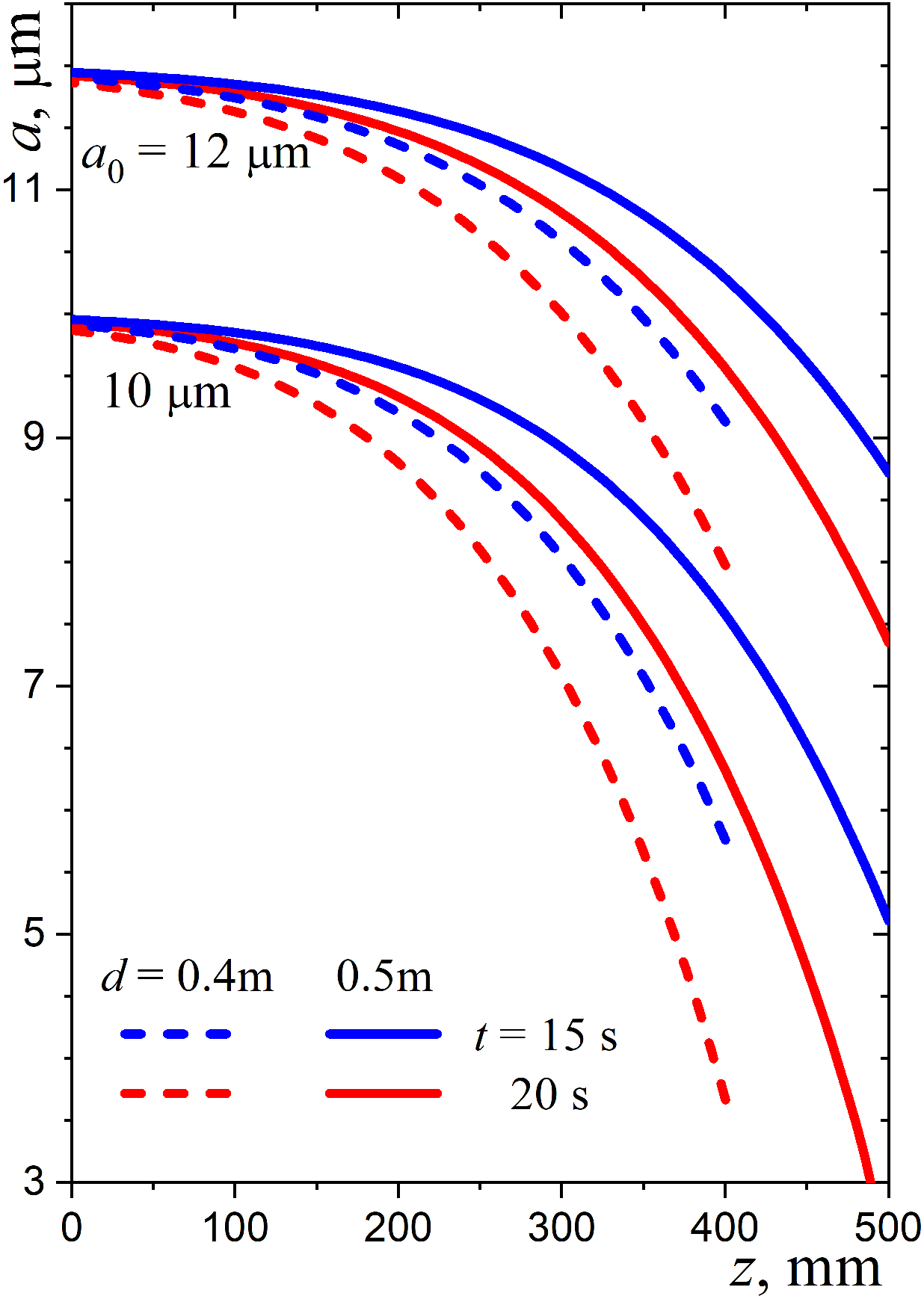 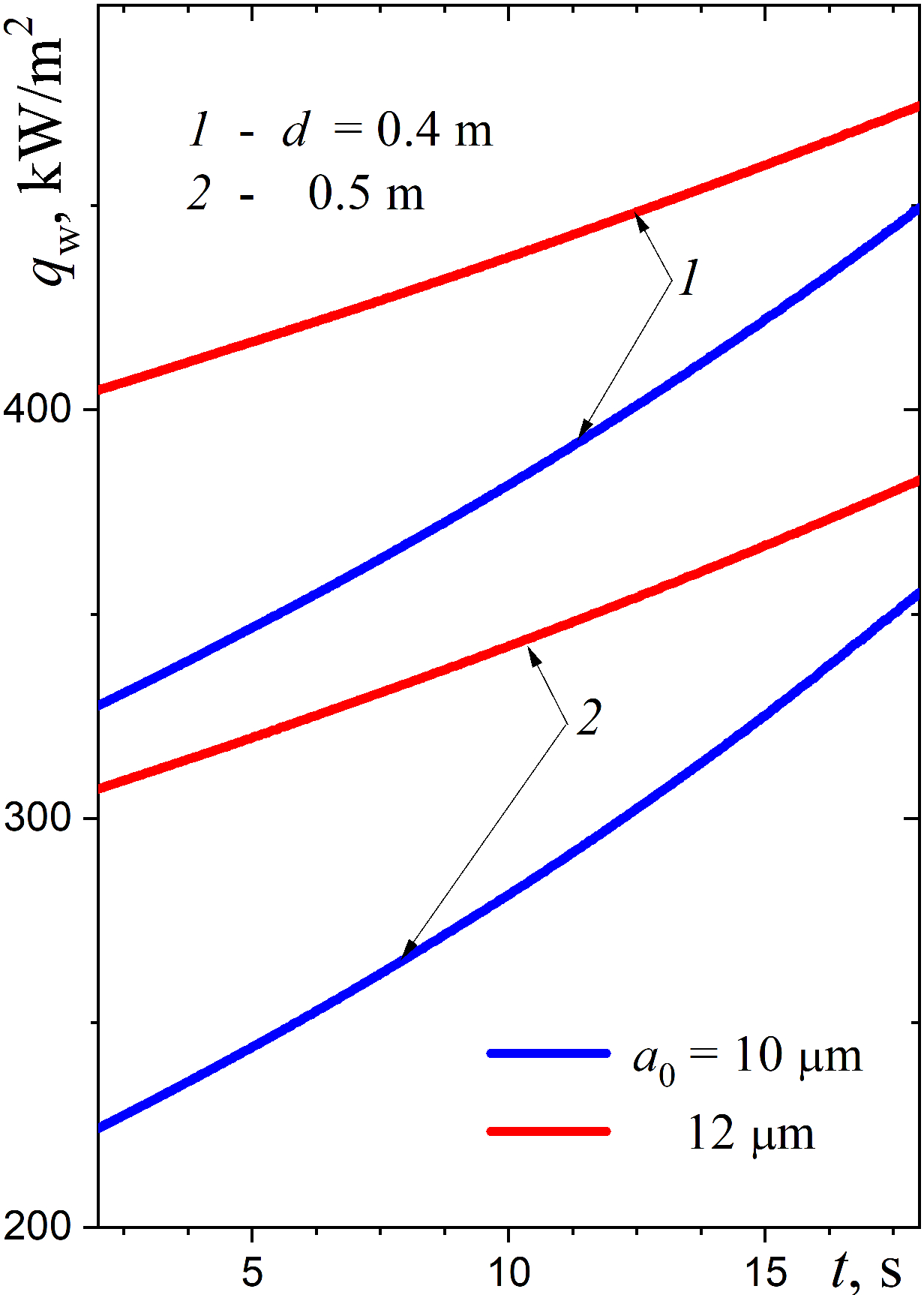 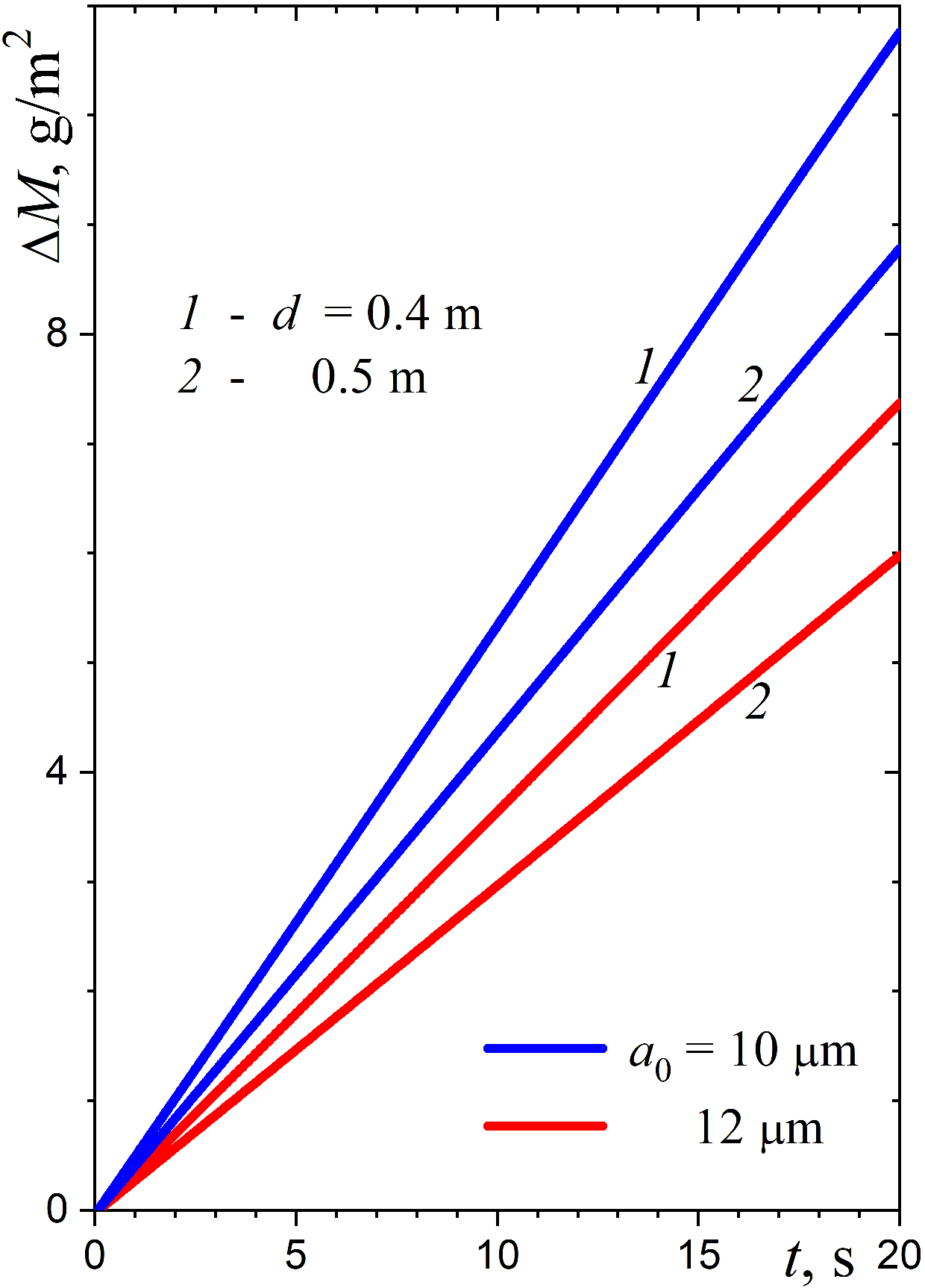 Figure 2. Computational results for the model problem: (a) profiles of the particle radius; (b) and (c) time variations of the transmitted radiative flux and mass losses of the cloud

One can see in Fig. 2(a) that it takes a little bit longer than 20 s for almost total sublimation of SiC particles with initial radius of a0 = 10 μm, which are positioned at the irradiated external surface of the particle cloud. At the same time, there is a smooth profile of the particle radius from the initial value at the shadow surface of the cloud to the approximately three times smaller value at the cloud surface oriented to the Sun. The partial sublimation of particles makes the shielding effect considerably less than that at the beginning of the process; however, Fig. 2(b) indicates that the shielding efficiency of the particle cloud remains rather high even during the period of its sublimation (the total radiative flux without the cloud is equal to 2940 kW/m2).

The rate of mass losses due to sublimation is almost constant [Fig. 2(c)], and one can easily determine this value. It is important that the upper estimate for the case problem indicates very low rates of mass loss at the level of 1.5 kg/(m2·h). It should be noted that there is at least one effect additionally working to decrease this value. This is the light pressure, which strongly increases with a decrease in the size of the sublimating particles (Burns et al., 1979). For single particles, the force due to the light pressure is expressed as follows (Van de Hulst, 1957):

where c0 is the speed of light and Qtr is the transport efficiency factor of extinction. The light pressure leads to the propagation of small particles inside the cloud and protects them from being transformed too fast in the final sublimation. As a result, relatively large particles appear at the front of the cloud and continue to fight against the heating of the protected surface. This is expected to considerably decrease the mass losses. It should be noted that the effect described is very similar to the effect obtained when water spray curtains are used in fire radiation shielding (Dombrovsky et al., 2016, 2020).

4. POSSIBLE USE OF MULTI-LAYER COATINGS TO IMPROVE SHIELDING OF SPACE VEHICLES FROM SOLAR IRRADIATION

The computational results obtained by Dombrovsky et al. (2017) and Soufiani et al. (2018) were completed by Dombrovsky and Reviznikov (2018) through calculations for particles of various sizes and also at various distances from the Sun (see Figs. 3 and 4). As previously mentioned, the assumption of ideal mixing of particles in a cloud leads to better shielding from solar irradiation. This effect appears to be really significant in relation to the choice of the optimal initial radius of the SiC particles. 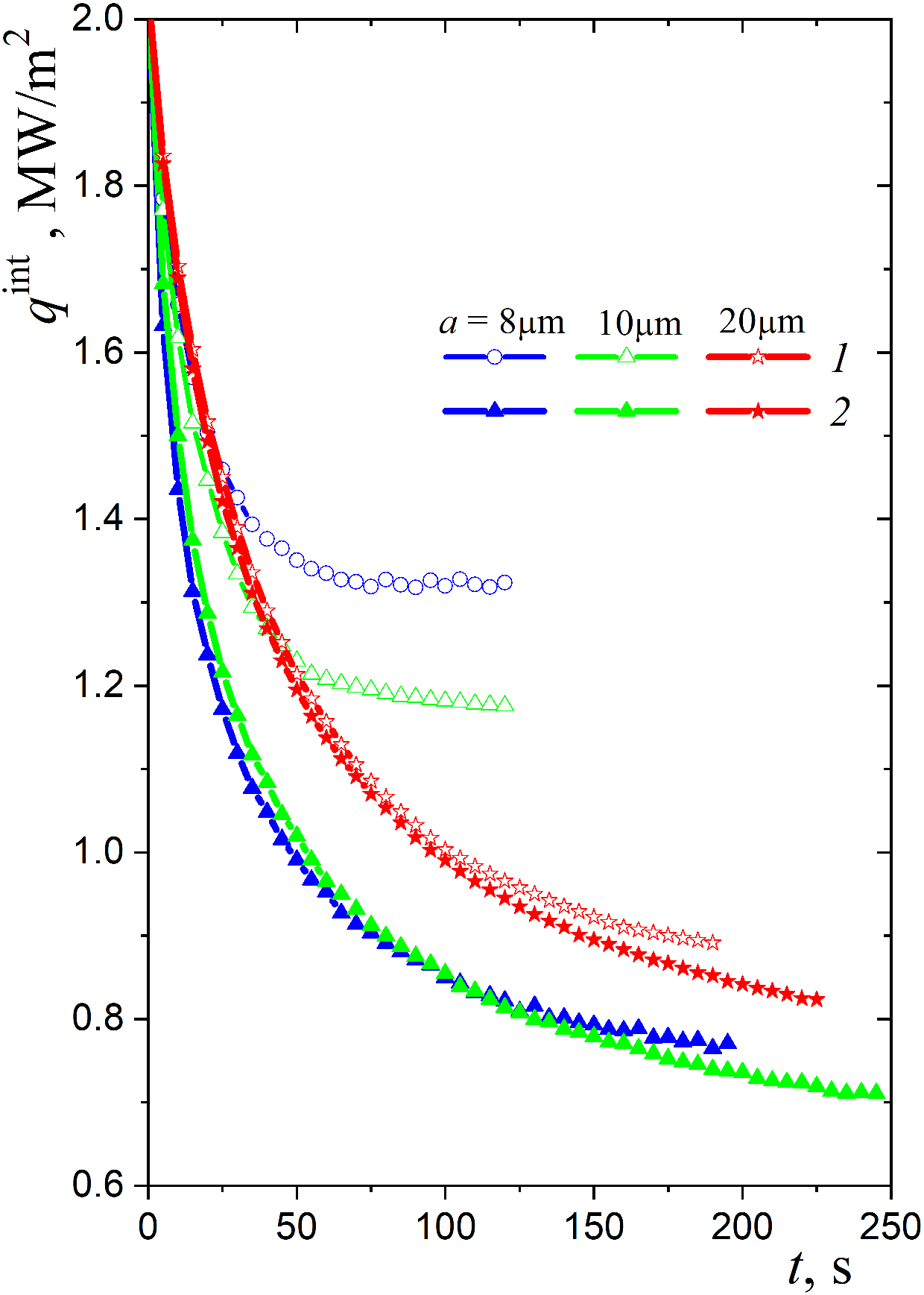 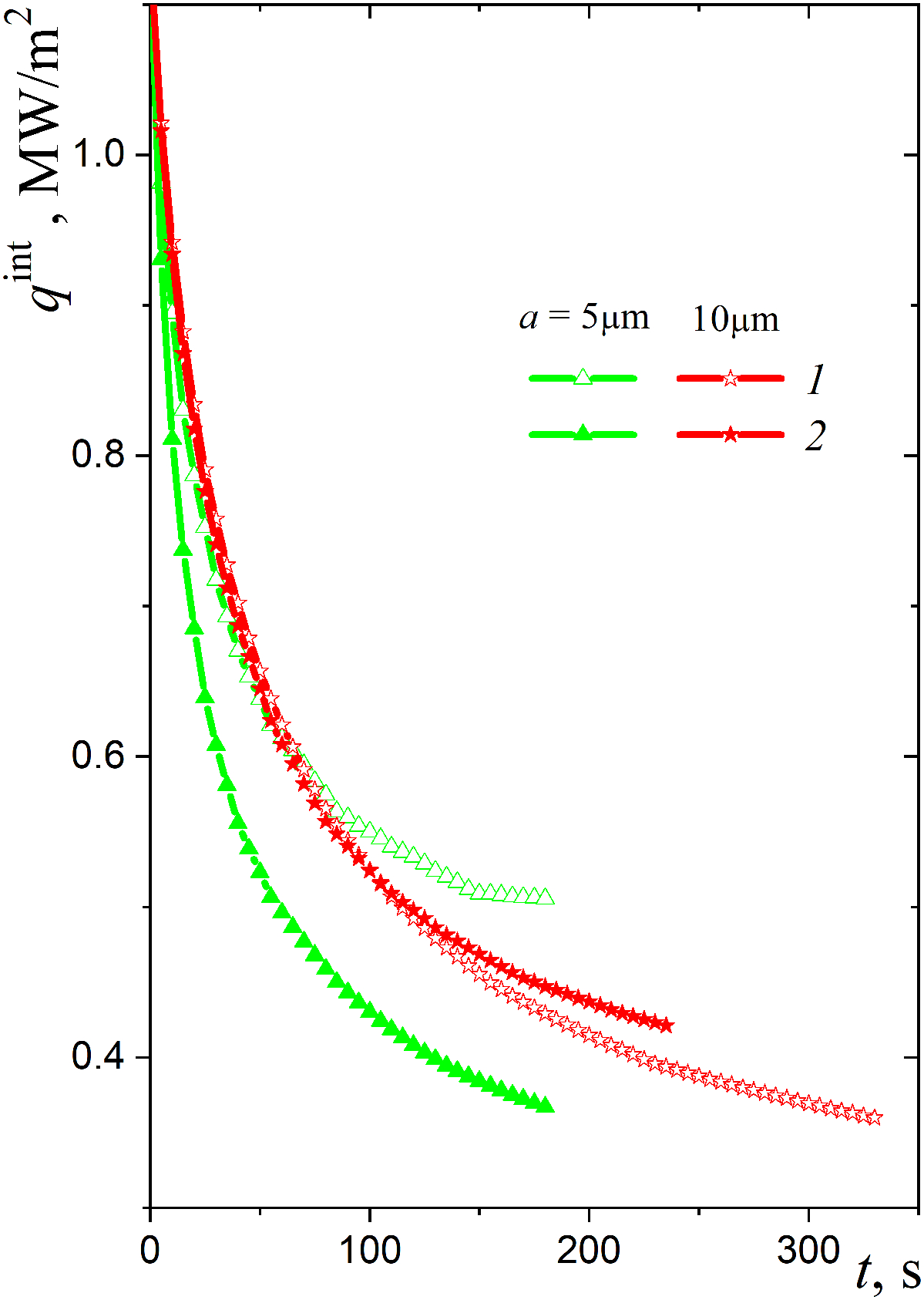 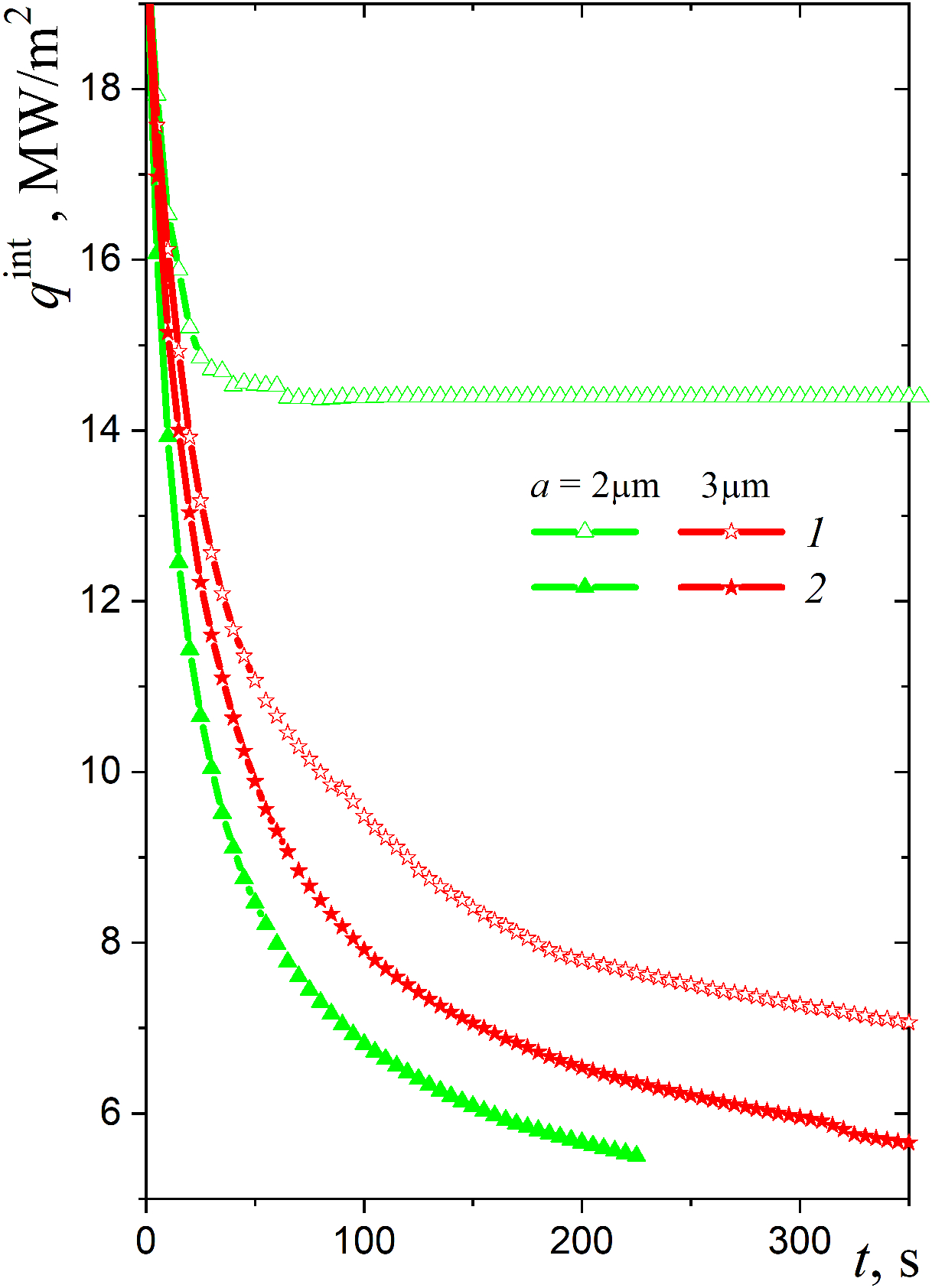 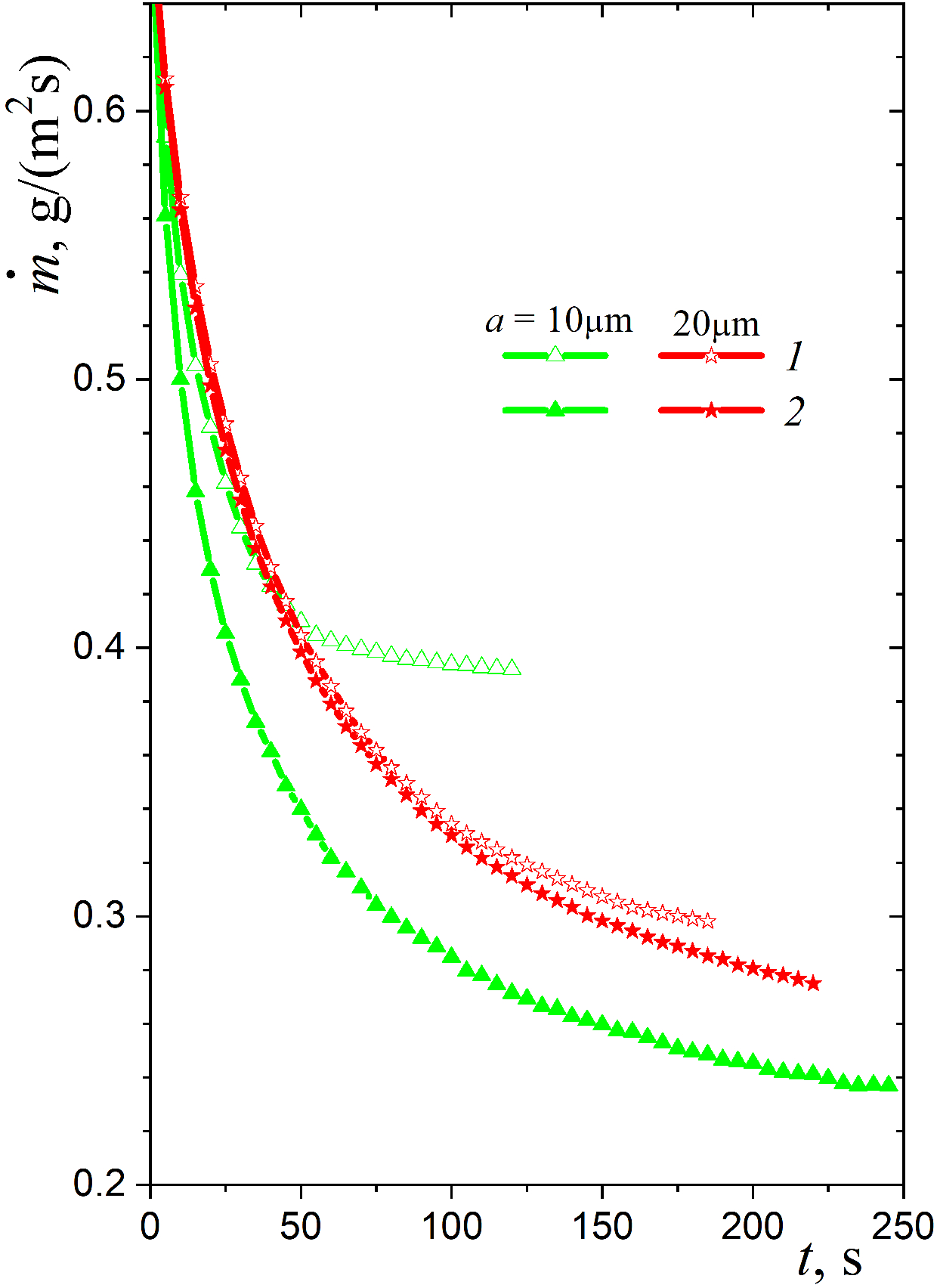 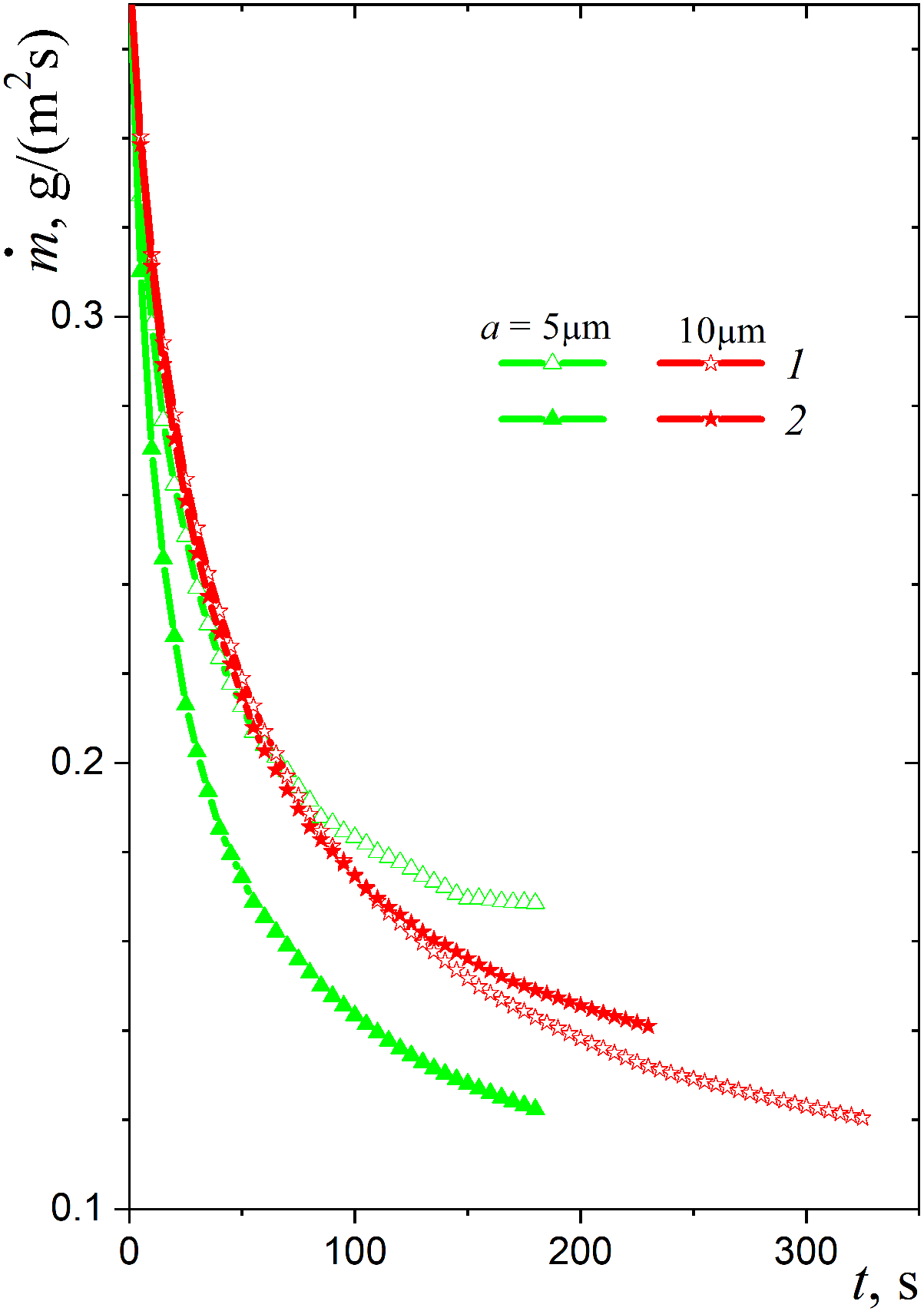 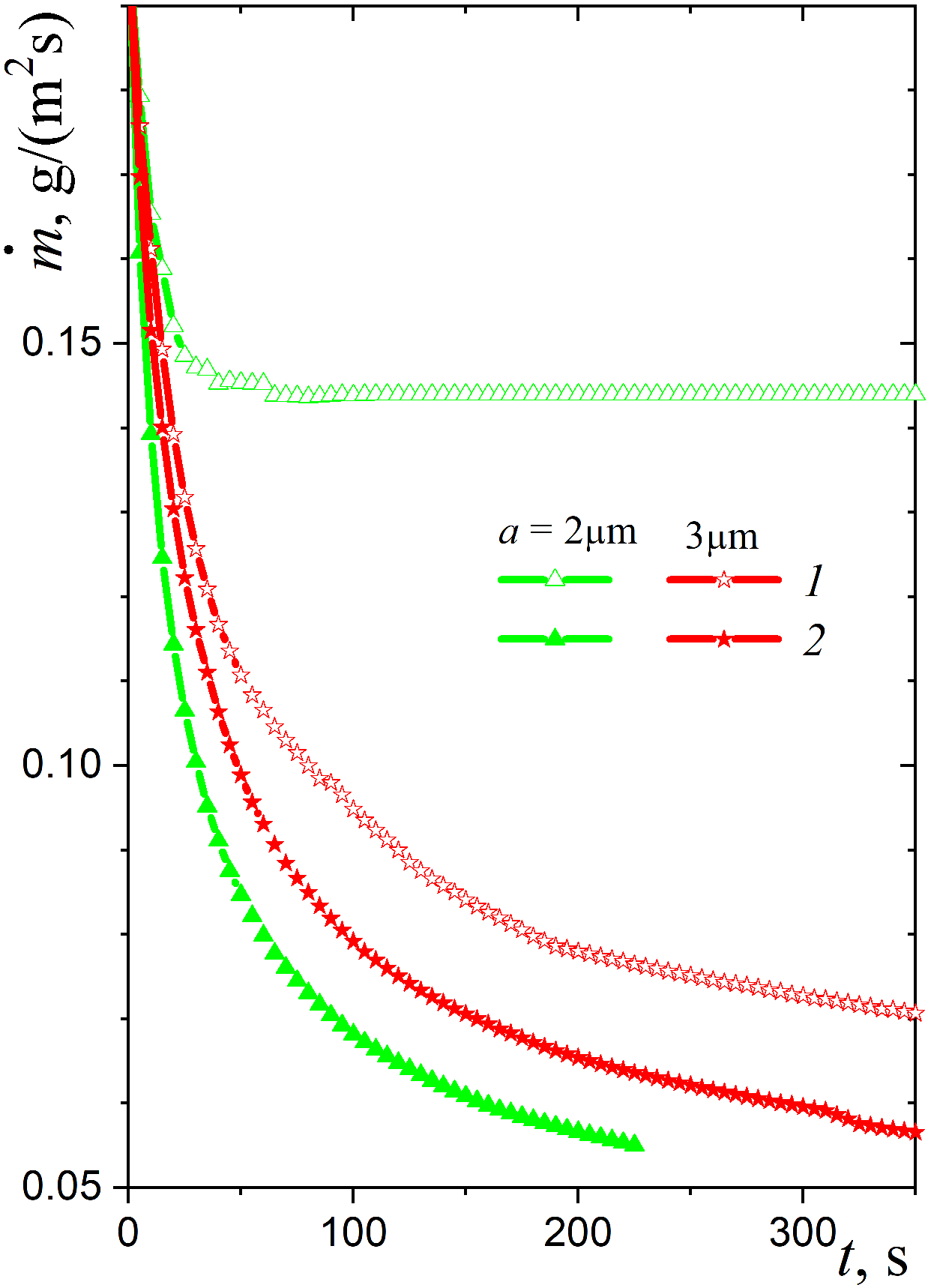 At a distance of R̅ = 5, particles with a radius of ∼10 µm show the best results for the ideal mixing of particles in a cloud, whereas a particle radius value of a = 20 µm is preferable for a cloud of immovable particles. One can see that the optimal choice of the initial size of the SiC particles makes it possible to decrease the integral radiative flux to the protected surface at the quasi-steady thermal state of the cloud by ∼56%–61%. The last result is very good for such a small distance from the solar photosphere. As was expected, relatively small SiC particles would be better at large distances of the space vehicle from the Sun. At R̅ = 6 [see Figs. 3(b) and 4(b)], the optimal initial radius of particles is about 5 µm for the ideal mixing of particles, whereas the value of a = 10 µm is better for a hypothetical cloud of immovable particles. The computational data for R̅ = 7 [Figs. 3(c) and 4(c)] confirm the aforementioned trend.

The assumption of almost ideal mixing of particles in a cloud seems to be more realistic because it takes into account the combined action of the light pressure at the hot surface of the particle cloud and the drag force of the gas flow near the surface of the destructed thermal protection. Therefore, this approach was used to estimate the dependence of the optimum initial radius of the SiC particles on the distance of a space vehicle from the Sun (see Table 1). The calculations showed that this dependence is really monotonic and rather strong. This means that the use of multi-layer composite thermal insulation, characterized by an increase in embedded particles from the surface layer to deeper layers, can be recommended as a correct engineering decision.

TABLE 1: Variations of the optimum initial radius of SiC particles in relation to the distance from the Sun