Preferential cooling of hot spots is achieved by using a dynamically reconfigurable array of “movable pins” integrated within a cooling plenum, which is inserted between the active device layers of a 3D stack, to bring more coolant at a higher flow rate to the area(s) where the hot spot(s) are activated, and the temperature of the substrate starts rising. The cooling system device schematic and operating principles in the figure illustrates the “self-directed” cooling. The “self-directed” cooling is achieved in a fully passive way by utilizing the Marangoni effect that preferentially moves the liquid droplets/slugs, suspended as "movable pins" within the cooling plenum(s) between the active device layers, in the directions of the increasing surface tension. Using a liquid substance with high thermal conductivity and whose surface tension decreases with temperature, the droplets/slugs ("movable pins") composed of such a substance and confined in the cooling interlayer plenum will move towards the cold areas (where no cooling is needed) and away from the hot areas (hot spots). This opens a pathway for preferential flow of the coolant within the plenum at a higher flow rate towards the domains, which need higher heat dissipation (hot spots) and bypassing the inactive (cold) domains that do not require cooling at a given instance of time. Droplets are charged or stabilized by surfactants to prevent their coalescence. Unique advantages of this cooling scheme include being fully passive and dynamically self-adjusting (adaptive), as the liquid droplets/slugs ("movable pins") are always moving away from the hot zones and towards the cold zones, thus preferentially directing the coolant flow from the cold zones to the hot zones where it is most needed. 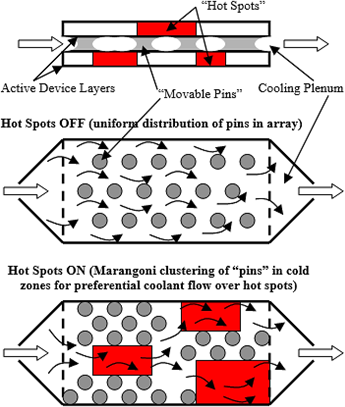 This breakthrough does not only provide “directed” cooling of hot spots, but also does so without a need for an active control scheme, thereby reducing the packaging complexity, cost, and improving system reliability. As the system design is universal, it can work with different coolants, ranging from air to liquids, depending on the specific power dissipation profile of a given end-user application. The form factor of the cooling system which is composed of a small-gap plenum confining the “movable pins” is fully compatible with the architectural features of a 3D stacked-die, thus providing a possibility of a chip-level “drop-in” solution for as many as required active device layers, on an as-needed basis, depending on a specific power profile for each active layer. This cooling system minimizes power consumption (cooling overhead), as a coolant is not pumped over the cold (inactive) zones of the chip, which do not need any cooling, and only cools the hot (power dissipating) zones of the chip. This is a critical advantage for handheld systems.