In order to correctly evaluate the mechanical properties, as well as the thermal properties (such as the conductive and radiative properties), the foam structure must be modeled as close as possible to real three-dimensional (3D) foam geometry.

We consider some typical structures of highly porous cellular materials. Cellular structures can be classified morphologically, distinguished by two types of materials: (1) open cell carbon, metallic, or ceramic foams and (2) closed cell foams, such as polystyrene or polyurethane foams. The foam structure varies significantly depending on whether it is open cell or closed cell foam (Figs. 1 and 2). 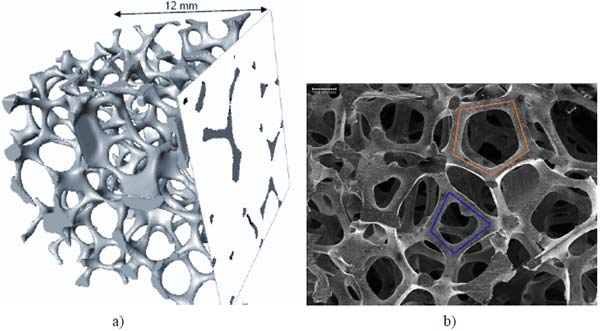 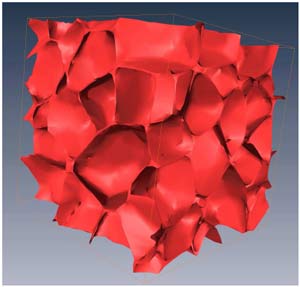 Open cell foams have a reticular structure. In this simplest case, the bulk material concentrates entirely on the cell edges forming the struts. The interstitial gas is the same as the external environment gas; typically, air. This is illustrated in the photographs presented in Fig. 1 for aluminum open cell foams. The solid matrix is composed of struts oriented in different directions. The strut thickness is always much smaller than the cell diameter.

Polystyrene and polyurethane foams, which are widely used in engineering practice, are often closed cell foams. The cells of these foams are delimited by thin membranes (walls). The walls intersect at the cell edges where strut formation can occur. The polystyrene foam structure varies depending on whether it is expanded or extruded polystyrene foam. As shown in the Fig. 3, the porous structure of expanded polystyrene (EPS) foams looks like a dispersion of pellets welded together [Fig. 3(a)]. Pores are formed by the free space between the pellets. The pore size varies from one to several millimeters, and the average diameter of the pellets varies from about 2 mm for a foam of density 35 kg/m3 to about 5 mm for a 10 kg/m3 foam. The porosity due to the inter-pellets space varies from 4% to 10% for standard EPS foams. Figure 3(b) shows the internal structure of a pellet portion magnified 10 times by scanning electronic microscopy (SEM). Cellular pores are contained in the pellets. One can observe that the walls that intersect at the cell sides do not give rise to bulk material store: there is no strut formation. The pores in the cellular material are filled with air and their size is approximately equal to 100 μm. The cell diameter is much larger than the wall thickness. The porosity of this cellular material varies from 97% to 99.5%.

Other polymeric foams, such as extruded polystyrene foams (XPS) and polyurethane (PUR) foams, have a more complex cellular structure, which not only contain walls (cell faces) but also struts that form at the junction of the cells. This is illustrated in Figs. 4 and 5 by the SEM photographs of a PUR foam and a XPS foam, respectively. The walls are usually thinner than the struts and the cell diameter is much larger than the strut thickness.

From microscopic analyses the following can be observed:

An adequate theoretical description of a foam microstructure is not an easy task. To overcome this problem, some researchers have used X-ray tomography analyses (Zeghondy et al., 2006; Petrasch et al., 2007; Coquard and Baillis, 2010). However most of the approaches used for simulating the thermophysical properties are based on idealized cellular structures, which are composed of periodic micro-objects that can be described via unit cells. The foam structure is often idealized and simplified. An artificially ordered model is then used for depicting the structure. Cellular foam structure is often represented by polyhedral cells.

We mainly focus on these latter models because they are currently being used in engineering practice and appear to be very useful in both physical studies of the cell diameter effect and optimization of the main thermal characteristics of foams. Three usual shapes of polyhedral cells are shown in Fig. 6: cubic, dodecahedron, and tetrakaidecahedron cells. The geometric parameters of these three polyhedral cells are given in Table 1. Note that the type of polyhedral cell determines the number of struts and walls per unit volume (which are important parameters used to predict the radiative properties). The edges length, li, is defined in Fig. 6.

The majority of publications on the radiative properties modeling different cellular foams considers that the unit cell of the foam closely resembles a pentagon dodecahedron (Glicksman et al., 1992; Kuhn et al., 1992; Baillis et al., 1999, 2000; Coquard et al., 2009; Kaemmerlen et al., 2010). Foam structure can be usually treated as a dispersion of single simple-shape particles interacting with the radiation independently. Based on microscopic analysis of different foams, the structure modeling usually consists of dividing cells into walls and struts. Walls and struts are modeled as thin slabs (platelets) and cylinders, respectively.