In their books, Baillis and Coquard (2008) and Dombrovsky and Baillis (2010) give comprehensive general overviews of the experimental approaches and theoretical models commonly used to determine the radiative properties of highly porous cell foams. Here, a summary is presented concerning open cell foams, but the reader is encouraged to consult the above-mentioned books for more details and specific results.

The results of the experimental characterizations of the spectral radiative properties of metallic, ceramic, and phenolic open cell foams have been reported by Hendricks and Howell (1996), Tseng and Kuo (2002) and Zhao et al. (2004). The radiative properties were identified from the transmittance and reflectance measurements using an identification procedure. Hendricks and Howell (1996), Zhao et al. (2004), Tseng and Kuo (2002) showed that the spectral quantities strongly depend on the wavelength, density, and cell size. Concerning the theoretical models, many studies have been conducted in the past years and the advances in this area have been considerable. These are presented and discussed below.

Theoretical Models Based on Polyhedron Cells

A theoretical model for open cell carbon foam was first developed by Doermann and Baillis (Doermann and Sacadura, 1996). It has been used subsequently for open cell foams by Baillis et al. (1999, 2000) and Loretz et al. (2008a). This model uses the geometrical optics laws to estimate the extinction coefficient, scattering albedo, and scattering phase function of open cell foams, since the characteristic dimensions of the porous structure are much greater than the radiation wavelength. These authors considered the porous structure as a mixture of large opaque struts with varying thicknesses and large opaque strut junctures that scatter radiation independently (Fig. 1). The bases of this model are relatively simple and are detailed here. Consider that the diffraction contribution to scattering can be usually ignored because of the extremely narrow main diffraction peak in the forward direction (Brewster, 1992). When the geometrical optics approximation is valid and the contribution of diffraction is negligible, the expressions for the efficiency coefficients are as follows (Brewster, 1992):

FIG. 1: Open cell carbon foam particles (Doermann and Sacadura, 1996): (a) strut juncture when faces are curved; (b) perspective view of a strut of variable thickness.

The scattering phase function corresponding to the reflection from large opaque reflecting convex particles with random orientations is determined by applying the following theorem 1 (van de Hulst, 1957, 1981): ‘‘The scattering pattern caused by a reflection on a very large convex particle with random orientation is identical to the scattering pattern by reflection on a very large sphere of the same material and surface condition.’’ Baillis et al. (1999, 2000) assumed that the reflection is diffuse. Consequently, the radiative properties can be determined from the following parameters: ρλ, N1, Gj, and j = 1, 2. The number of particles of type 1 (N1) is calculated from the porosity and using the geometrical characteristics of a pentagon dodecahedron cell (see the article Classification of foam structures). The hemispherical reflectivity of the solid matrix, ρλ, cannot be reliably obtained from the literature because of the great dispersion of the reported data. Therefore, Baillis et al. (2000) have determined using an identification method based on the transmittance and reflectance measurements conducted on the foam sample.

Loretz et al. (2008a) used a similar approach to model the radiative characteristics of aluminum foams. The original model was improved by considering different kinds of cell shapes, strut cross sections, and junctures using the data obtained from microscopic and tomographic analyses. A new phase function taking into account the type of reflection (diffuse or specular) at the solid–air interface was also suggested by Loretz et al. (2008a). The reflection at the solid–air interface depends on the roughness of struts. As an example, the roughness of a metallic strut is presented in Fig. 2. Loretz et al. (2008a) assumed that the foam is characterized by an intermediate reflecting behavior comprised of diffuse and specular reflections. Thus, the scattering phase function was represented by a parameter of specularity, psp as follows:

where the zero value of psp corresponds to the diffuse reflection. When psp = 1, the reflection is specular and the scattering is isotropic. 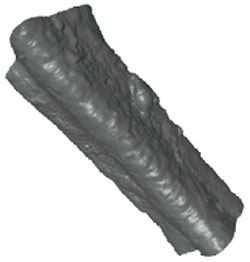 For each wavelength, an identification method is used to determine experimentally the extinction coefficient, the hemispherical reflectivity, and the parameter of specularity from transmittance and reflectance measurements performed by Fourier transform infrared spectroscopy.

Reservations about the previous models concern the hypothesis of independent scattering, which is generally considered for materials with high porosities. Therefore, in order to determine whether dependent scattering effects are noticeable in open cell foams with an opaque solid phase, Coquard et al. (2010) conducted an approach based on the ray tracing procedure to evaluate the extinction coefficient of regular cellular materials in the presence of near-field effects and compared their results with the analytical models, assuming independent scattering. In light of their results, it seems that for standard metal or ceramic foams—with porosity generally generally ranging from 0.85 to 0.95—neglecting the dependent near-field effects is a rather satisfying assumption.

They have also studied the influence of the shapes of cells, strut cross sections, and strut junctures. However, the extinction coefficients given by all of the different models demonstrate very small deviations. That is the reason why, in order to limit the number of parameters of the analytical model, investigating the most suitable cases of tetrakaidecahedral or dodecahedral cells with triangular struts cross sections and cubic junctures is recommended (Fig. 3). 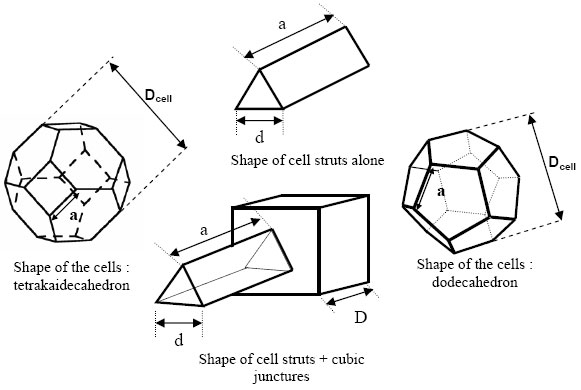 FIG. 3: Illustration of the cellular morphology retained for modeling of the radiative properties (Coquard et al., 2010).

Coquard et al. (2010) showed that the Rosseland approximation leads to errors lower than 4% for the whole range of standard foams they studied. They deduced the following relation to calculate the radiative conductivity:

For tetrakaidecahedron and dodecahedron cells without strut junctures, the radiative conductivity can be calculated directly from ε, Dcell, ρ, psp, and T by

When strut junctures are present, no direct relations between krad and ε, Dcell, ρ, psp, and T can be obtained. In these cases, for tetrakaidecahedron cells with strut junctures Eq. (4) should be used in conjunction with the following:

and for dodecaedron cells with strut junctures:

The advantage of this model is to allow investigating the influence of parameters in order to optimize the materials thermally. As an example, Fig. 4 illustrates the variations of the radiative conductivity in open cell foams with the solid fraction, the cell mean diameter, the reflectivity, and the specularity parameter of the solid phase for different distributions of the solid phase in the struts and lumps and different cell shapes. The mean temperature was set at 500 K. 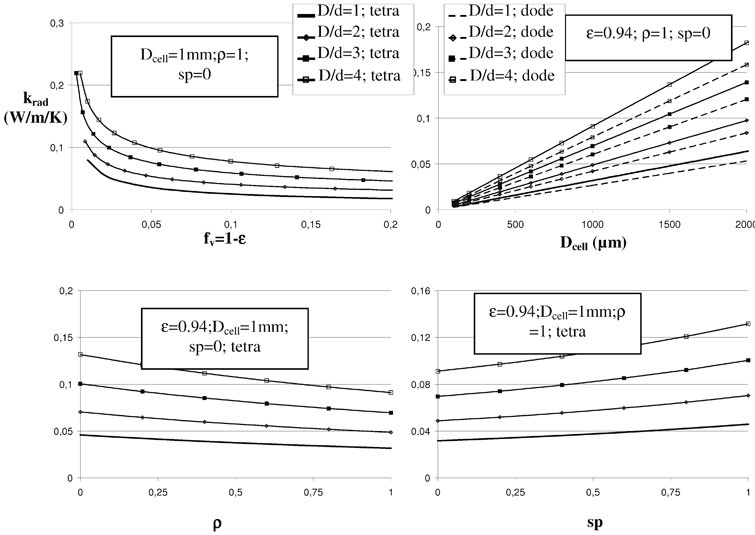 FIG. 4: Influence of the structural parameters of the foam and of the optical properties of the solid phase on the radiant conductivity (Coquard et al., 2010).

The magnitude of radiative heat transfer is also strongly dependent on the temperature of the foam. This influence between 300 and 1100 K is illustrated on Fig. 5 for a foam with tetrakaidecahedron cells and ε = 0.9, Dcell = 1 mm, ρ = 1, and psp = 0. 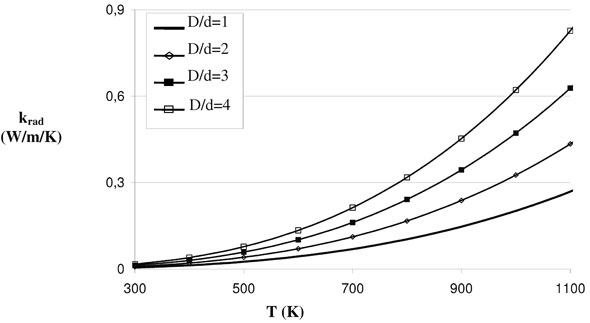 FIG. 5: Influence of the temperature on the radiant conductivity of the foam (Coquard et al., 2010).

Theoretical Models Based on Tomographic Analysis

The previously described models where based on some assumptions concerning idealized homogeneous cellular structures, which are composed of identical particles. The shapes of the model particles were generally simplified.

These limitations have stimulated the recent interest in the advanced tomography-based models. Actually, these advanced models enable us to take into account the real morphology of the porous structure. In order to determine the extinction coefficient of metallic foam, an original method was developed by Loretz et al. (2008b). The tomographic images shown in Fig. 6 were used. For a sample of thickness h, the extinction coefficient can be calculated from the proportion, denoted as Trans, of the photons passing through the sample without intercepting the solid substance zones, which can be done using the Beer law: 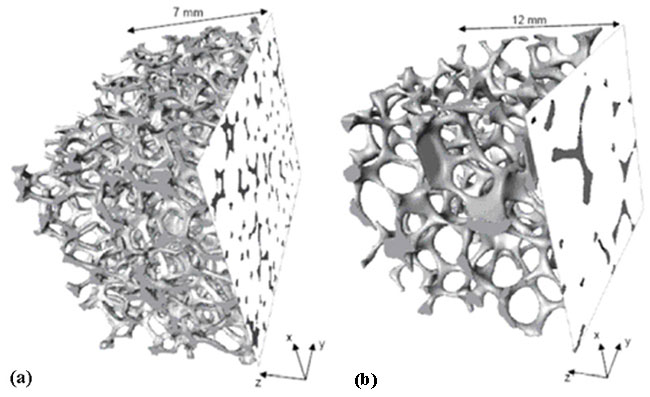 The parameter Trans is usually determined from spectrometric measurements or Monte Carlo (MC) simulations using the microstructure obtained from modeling or tomographic analyses. MC simulations require a huge computational effort. Loretz et al. (2008b), have suggested a more convenient method based on X-ray tomography analysis in which tomographic slices are used in a very simple manner to determine the parameter Trans. The shadow of each slice simply can be projected in the (x, y) plane. After projection of each slice, Trans is equal to the ratio of the remaining white pixel areas divided by the total surface area of the (x, y) slice. This method presents several advantages. First of all, the method is very fast and does not require any time-consuming calculations, in contrast to the MC procedure. In addition, the directional extinction coefficient can be obtained, provided that the sample is large enough in the directions considered. This allows studying the anisotropy of the extinction coefficient. Obtaining the extinction coefficient in different directions is straightforward, and is done simply by rotating the sample. The extinction coefficient of other porous materials also can be determined using this method. The limitations of this model concern the validity of the geometric optics approximation and the independent scattering hypothesis, which are assumed in this approach.

The latter assumption is not obvious because the particles forming the foam might be very close to each other. These limitations have stimulated the recent interest in advancing tomography-based models combined with ray-tracing approaches. Zeghondy et al. (2006a,b) were the first researchers to calculate the radiative properties from the representation of the porous structure obtained from X-ray tomography. They applied radiative distribution function identification (RDFI), originally proposed by Tancrez and Taine (2004), to a tomographic representation of open cell mullite foam. This approach was successfully validated by Tancrez and Taine (2004) through a comparison of the measured reflectances with the corresponding values predicted theoretically for a homogenized semi-transparent material with anisotropic radiative properties obtained by RDFI. Almost simultaneously with Zeghondy et al., (2006a,b), Petrasch et al. (2007) used another MC ray-tracing procedure for reticulate porous ceramics. They calculated the extinction coefficient and scattering phase function based on the probabilistic distribution functions of the extinction path length and of the directional cosine of incident radiation. Petrasch et al. (2007) took into account the totally diffuse or perfectly specular surfaces of the struts. Recently, Haussener et al. (2010) have determined the extinction coefficient and scattering phase function of reticulated porous ceramics from the collision-based MC calculations. The experimental structural data obtained by tomographic analysis were used in these calculations. The limitation of the use of such MC simulations for tomography samples is that it is a very time-consuming procedure. Therefore, this technique is not appropriate for engineering practice at the moment.

In conclusion, the theoretical models developed over the past years in order to predict radiative properties of highly open cell foam seem to be appropriate for the cases of carbon and metallic foams but, in our opinion, more progress is required in the future concerning ceramic foams. Indeed, ceramic struts could be non-opaque but semi-transparent, requiring more radiative parameters to be determined on the strut local scale and used as input data in the model. Moreover, the published studies of interested, experimentally or theoretically, concerning the thermal properties of metal or ceramic foams essentially have been done at ambient temperature. Recently, Coquard et al. (2010) underlined the need for knowledge concerning heat transfer at high temperatures in these kinds of materials and they have enlighted the reader concerning the mechanisms of conductive and radiative heat transfer at high temperatures.